“Neuroprosthesis” Restores Words to Man with Paralysis. UCSF neurosurgeon Edward Chang says a system that lets a man express his thoughts at 15 words a minute is just the beginning for computer-mediated communication. 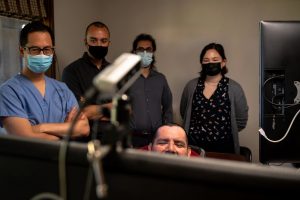 The ability comes from an experimental implanted device that decodes signals in the man’s brain that once controlled his vocal tract. The man is currently limited to a vocabulary of just 50 words and communicates at a rate of about 15 words per minute, which is much slower than natural speech.

Pancho has not been able to speak since 2003, when he was paralyzed at age 20 by a severe stroke after a terrible car crash. Now, in a scientific milestone, researchers have tapped into the speech areas of his brain — allowing him to produce comprehensible words and sentences simply by trying to say them. 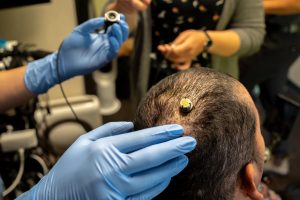 The team implanted a rectangular sheet of 128 electrodes, designed to detect signals from speech-related sensory and motor processes linked to the mouth, lips, jaw, tongue and larynx. In 50 sessions over 81 weeks, they connected the implant to a computer by a cable attached to a port in Pancho’s head, and asked him to try to say words from a list of 50 common ones he helped suggest, including “hungry,” “music” and “computer.”

“Our system translates the brain activity that would have normally controlled his vocal tract directly into words and sentences,” said David Moses, a postdoctoral engineer who developed the system with Sean Metzger and Jessie R. Liu, graduate students.