Voice of Specially Abled People (VOSAP), a leading global not-for-profit organization in the disability sector organized an enablement event of 75 Specially Abled People on the 15th of May 2022 at APH, Belgavi, Karnataka. Honorable Member of Parliament, Smt. Mangala S. Angadi joined the event as Chief Guest to witness the enablement of 75 Divyangjan from the rural areas of Karnataka.

40 beneficiaries received heavy-duty tricycles made by Blind People Association (BPA), Ahmedabad, and 35 were given automatic sewing machines procured from USHA Company. For the receivers of these enabling devices, these were not just devices but a ray of hope for a better
future. They took a public pledge to use these devices for their enablement and empowerment.

Mr. Pranav Desai, the founder of VOSAP, joined the event digitally from the US. He thanked generous donors from the USA and every individual volunteer in Belgavi, who made the event possible on the ground. Thanking the MP for joining the event, Mr. Pranav reiterated his vision of strengthening the Accessible India Campaign launched by the honorable PM of India. His speech further focused on the role of technology in the empowerment of SAP. He expressed his happiness that the enrollment and selection process of the 75 beneficiaries by the volunteers were done digitally with lot of efforts by volunteers. He also asked the beneficiaries to check the 24- hours open exhibition of innovative assistive devices on the VOSAP website and see if they need something else to be empowered. He expressed his willingness to help more people in and around Belgavi region. 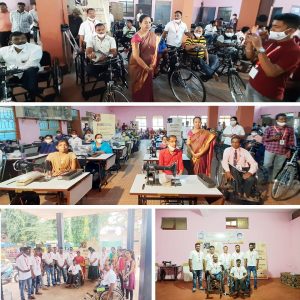 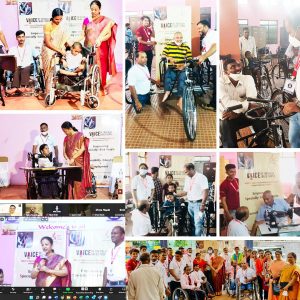 Honorable MP, Smt. Mangala S. Angadi also addressed the event and praised the organizers for doing such a great thing for society. She said that she is happy that VOSAP is serving PM Modi’s vision of sabka sath, sabka vikas by promoting the empowerment of PwD. She promised to extend any help required locally for such noble causes just like the PM does nationally.

The event concluded by distribution of tricycles, sewing machines to the approved beneficiaries.