VOSAP, a leading not-for-profit organization in the field of disability, commemorated Honorable PM Modi’s birthday by enabling 100+ ‘divyangjan’. An event was organized at NFBM Education Complex, Pune on 17 th September 2022. The event was aimed at enabling visually impaired students with assistive and enabling devices like Smartcane and Smartphone.

These assistive devices were distributed among visually impaired students of Jagriti School, Pune.Brigadier Vijay Prabhu, Vishistha Seva Medal Awardee,  was the chief guest who honored the event with his presence. Wing Commander V.K. Kala (Retd.) also joined the event and became the testimonial for the event which gave wings to the dreams of more than 50 students with visual impairment.

Mr. Pranav Desai, the founder of VOSAP, along with other volunteers joined the event virtually. Uday Mehtaji, one of the esteemed volunteers of VOSAP did lots of leg work on the ground to make the event successful. He was joined by Ms. Aarti Takawane, who coordinated on behalf of NFBM Pune.

The enabling event started with a welcome song sung by the students of NFBM Jagriti School. Further, they also sang happy birthday to the honorable PM of India who turned 72 on 17th September 2022. Later, the students were given assistive devices according to their requirements and the dignitaries addressed the crowd.

Wg Cdr V K Kalaji expressed his happiness and gratitude to the founder of VOSAP for enabling those visually challenged students and bringing smiles to their faces. Brigadier Vijay Prabhuji also addressed the students and shared his life story to motivate the students. We look forward to explore possibilities of how VOSAP can provide assistive devices to Ex. Soldiers who suffered casulaties in order to protect our country.

Mr. Desai, while addressing the event, shared about his disability and how an assistive device (calipers in his case) changed his life. He shared his vision of enabling persons with disabilities so that they can productively contribute to the economy. He said that VOSAP and its initiatives are aimed at empowering and enabling persons with disabilities to make them self-dependent and contributing members of the development of the country. He told students that these assistive devices are a small contribution to their life’s journey that is going to be very long and fulfilling.

Mr. Birajdar from NFBM, Pune also addressed the students. Mrs. Mangal Wankhede, Principal for NFBM Jagriti School for Blind Girls also participated actively in the event. The event organized together by VOSAP and NFBM and sponsored by VOSAP was overall a great success. Blind students of the Jagriti School did not only receive the assistive devices but also got the opportunity to listen to the motivating speech by dignitaries. They got a live example in the form of Mr. Pranav Desai as to how a person can overcome disability and become a highly contributing member of society. 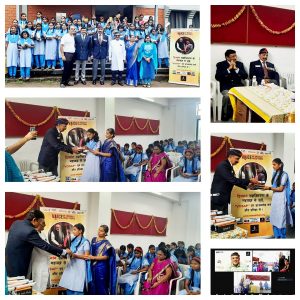