Ganesh Sharma is one of the few sculptors in the world who is also specially abled.
His story is highly inspirational as it is a vocational dedication to Art despite heavy physical challenges.
His thirst for knowledge has made him learn from new and young people equally and has made him what he is today.

Ganesh Sharma was born and raised in Jammu. He was attracted to art and sculpture from a very young age.
When he enrolled himself at the Fine Arts college in Jammu, he became inspired by Prof. Vidyaratan Khajoria who he calls as the founder of Sculpting and his Guru.

With his guidance, Ganesh started his sculpting and started showcasing his art at state and national levels. On 30th April, 1991 he met with a road accident which left him disabled in his right leg that is shorter than the other with multiple fractures. 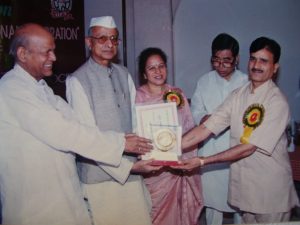 Life changed for Mr. Sharma after that. His sculpting came to a standstill because sculpting is something which cannot be done lying down in bed. His disability took him about 6-7 yrs from being bed bound to up on his feet and then slow walking with crutches. Mobility became a huge challenge. His spirit was not willing to give up on anything and even today he moves around either with a stick or a wheelchair. The accident and immobility awakened his intelligence to resort to Art, which became his breadwinning livelihood.

In 1998, he received a national award from Govt of India on Dec 3rd, 1998 which is the National Disability Day from Shri Atal Bihari VajpayeeJi. 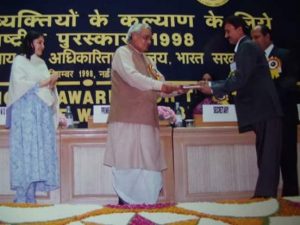 From that day onwards till now, Mr. SharmaJi has collected nothing but accolades and awards at both national and international levels. His area of expertise involves sculpting of stone and wood. His favorite stones to carve are Marble and the Tevar stone that is available in Katra en route Vaishno Devi. It is quite a task to acquire the stone, transport it and then sculpt it. 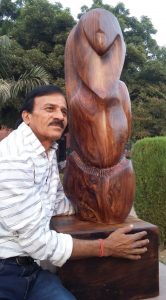 The art of sculpting involves cutting, chiseling, carving and then polishing it to get the required texture and look. There are only a few people who have mastered this kind of a fine art of hand sculpting. When asked about how the present day mechanics have helped him, SharmaJi said that after 2000, he has started using some machines to do the work of cutting and chiseling. That saves a lot of time. Before that, all processes were done only by his hands and he described to us as to how his hands were always wounded and sore.

Nothing has stopped him from bringing out the beauty in stone or wood. When asked about how one can do so much with stone and wood that are so hard, SharmaJi has an entirely different perspective. He said that it is the sculptor who goes into the depth of each stone, puts positive energy by eliminating the negative space and bringing out the texture, and determining the heights and dimensions that are proportional. This brings out the soul in each stone. When asked whether it is the same with wood, he says until you go deeper you won’t see the beauty of the wood.

His creations are mostly abstract and inspired by nature. He has sculpted animals, birds and some faces too. His sculptures are minimum 2 ft in height and weigh around 20-30kgs which itself is a challenge for a specially abled person. But nothing stops Ganesh Sharma when it comes to sculpting.

Ganesh Sharma participated in Art From Heart Competition by Voice of SAP in 2020. He got to know about the AFH competition through Facebook and one of his friend inspired him to take part. He was happy to be part of this organization and would do his best to get involved. 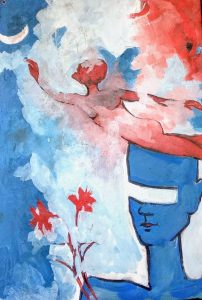 Life has thrown a lot of challenges at him. In Jan 2021, he got a heart attack and the doctor was not too hopeful and given only 10 percent hopes, but Ganesh SharmaJi is a born winner that he is fit and fine till date and is continuing to win awards internationally. He considers each day as a gift from God and hence the courage and determination to face all challenges that life has thrown at him.
Our good wishes to him to achieve more and inspire more.